Phoenicopterus ruber ruber
* It is debatable whether or not flamingos should belong to their own order, however many people feel that they are so unique with their long legs and curvy neck that they deserve to be in their own order. Some scientists feel that the flamingo belongs to the order Anseriformes, along with the geese because of their similar webbed feet, bill structure, and vocalizations. Others feel that they should be placed in the order Ciconiformes (herons and storks), based on pelvic and rib structure, along with similarities found in mitochondrial DNA.. Recent evidence has even surfaced over the past few years that flamingos are most closely related to grebes and should be placed in the order Podicipediformes.
Photo by Tim Knight

Why is the Caribbean Flamingo Classified the way it is?!?

The Caribbean Flamingo is classified into the Domain Eukarya because it contains cells with membrane bound organelles. These cells are eukaryotic, hence the name Eukarya. It is also in the kingdom Animalia because it is a heterotrophic organism, so it relies on another source to obtain its nutrients.  Chordata was assigned as its phylum because the flamingo had a notochord early on in its development. Along with a dorsal hollow nerve cord, pharyngeal slits, and a post anal tail. The flamingo is classified into the class Aves because it is a bird, which means that it is a warm blooded egg laying vertebrate that has feathers, wings modified for flight, and an active metabolism. The order is Phoenicopteriformes because many people feel that flamingos belong in their own group, even though this is still being debated.. All flamingos belong to the family Phoenicopteridae, except they all don't have the same genus name. Only two out of the five species of flamingo are given the genus Phoenicopterus, and this is because the flamingos in this group all have yellow eyes and a shallow keeled bill with lamellae on the inside. Phoenicopterus ruber is the scientific name for the Greater Flamingo which is further divided into two subspecies. The subspecies name for the Caribbean (American) Flamingo is Phoenicopterus ruber ruber and the subspecies name of the Greater Flamingo is then Phoenicopterus ruber roseus. 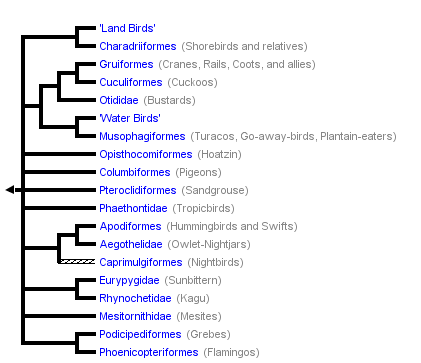